Heat is transferring in the convection of substance and Two-dimensional space, Ink- jet printing, 7x30cm, 2015 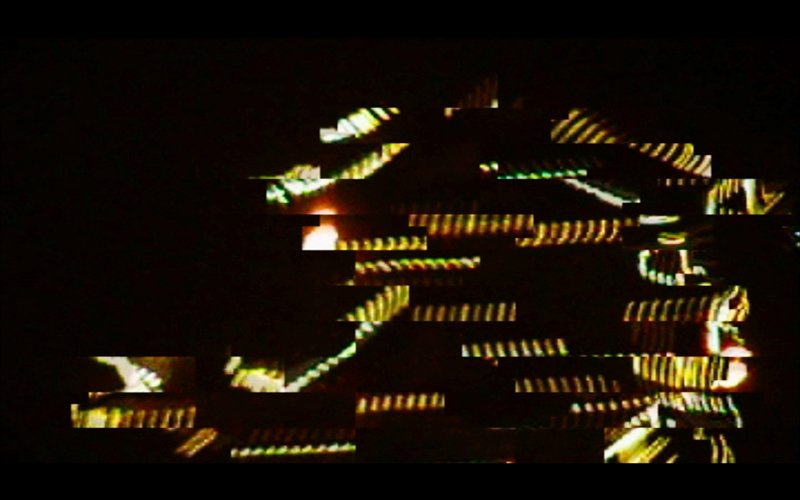 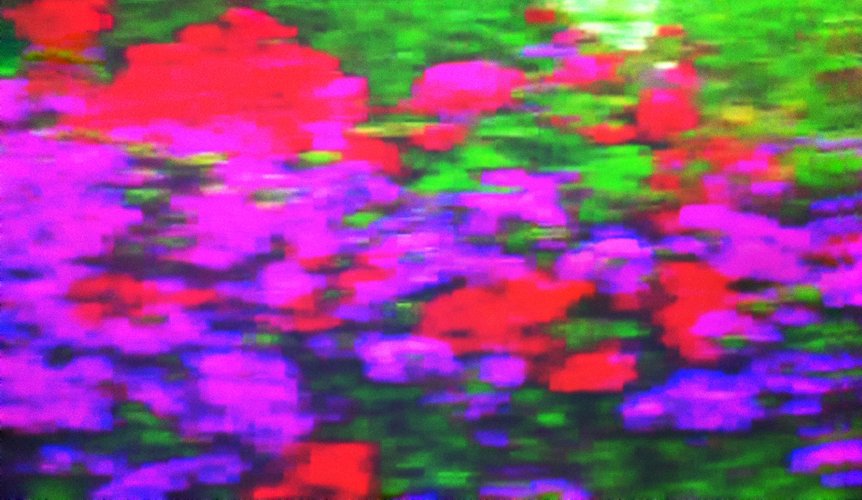 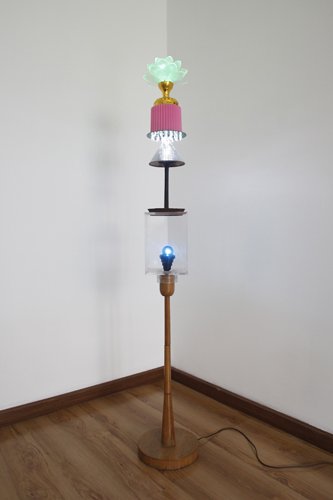 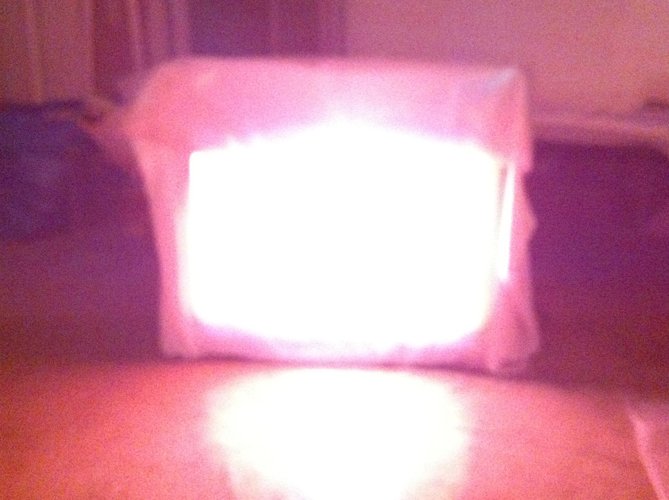 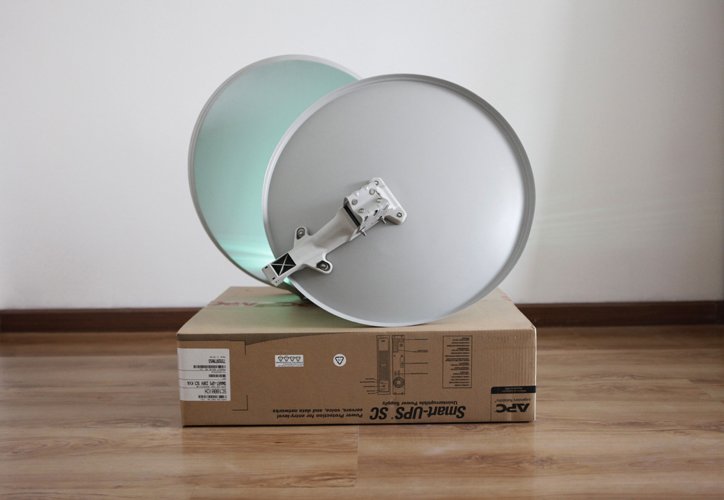 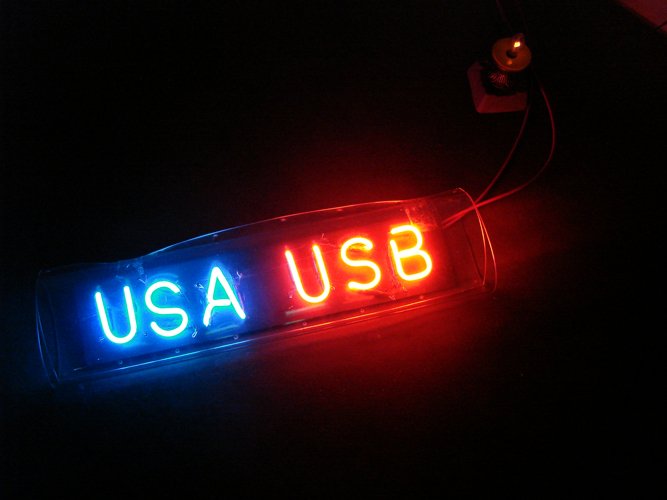 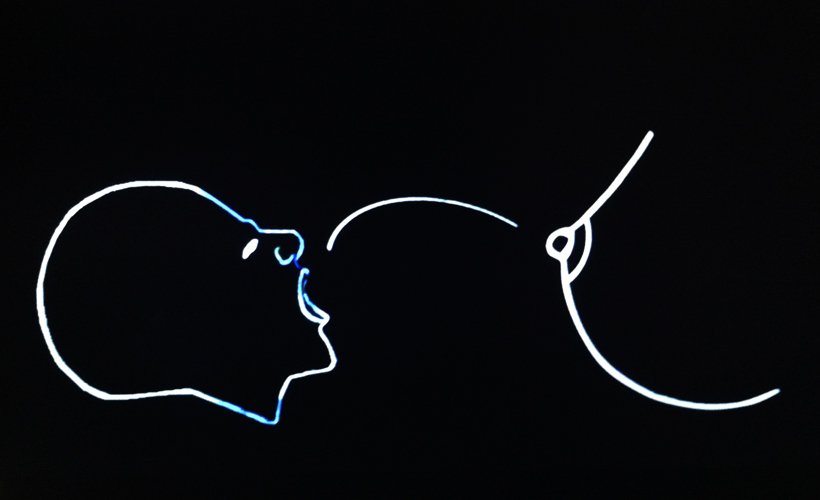 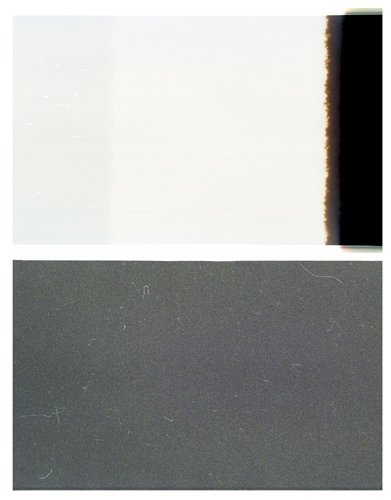 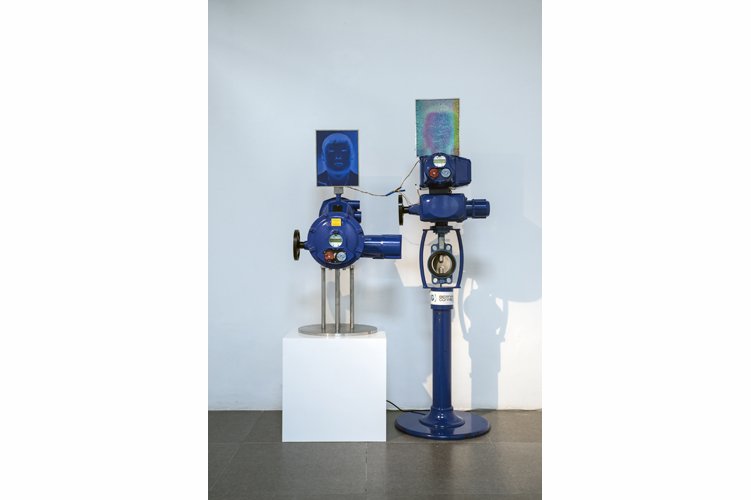 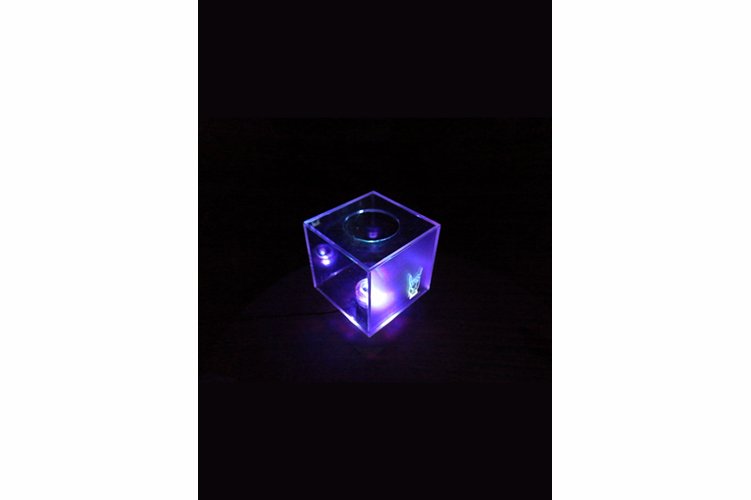 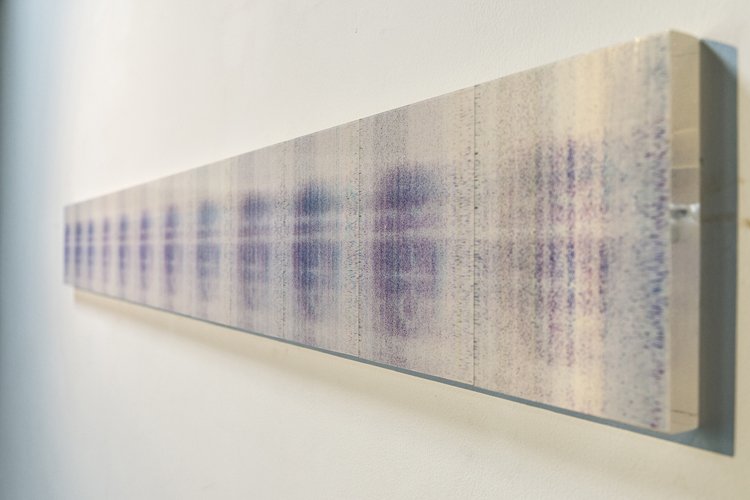 Ren Bo’s work originally attracted my attention because of its quiet humour and playfulness with and within the institutional setting of the gallery. The first piece of her work I discovered was USA USB (2008) in the group show Memory Identity, and presented in the current show. This small work was placed on the floor of a large darkened room. The piece itself displayed a certain relaxed attitude to its presentation, trailing its various component parts across the floor in an abstract formation that defied easy analysis – beyond the pun of the title formed in neon tubing. For me this quiet joke was enough to catch my eye, humour acting generally as a subversion of the world around us, and this simple and seemingly pointless play on words pleased me without forcing or expecting an interpretation. The piece left things open to interpretation, without pushing the viewer over that particular threshold.

I now realise this humour and playfulness works alongside a serious intent, with a touch of pathos in the hopelessness expressed in some of Ren Bo’s works. This combination works in a quiet way, to put the viewer in a strange position in relation to the objects and the subtle meanings of them. In the way that the pieces do not settle in their meanings or our experiences of them, this unease represents a small element of doubt in the world. This subtlety is an important part of the work’s life in the world. They are not didactic or histrionic in their presentations. The “calmness” of the works brings us up short. It does not express in itself nor does it demand physical or intellectual interaction. If it is an object it stands before us; if it is an image, it is presented to us, for consideration.
This subtlety of approach might be seen to be its own worst enemy in the arena of spectacle – if an artwork does not actively engage the audience, normally this would be seen this as a bad thing, perhaps appearing somewhat arrogant and alienating, leaving too much to the goodwill of the viewer. However this could be the promise of another mode of engagement.

While it is certainly true that Ren Bo’s works do not provide easy meanings (or interpretations which we might equate with an ability to engage with the work) nevertheless, the level on which Ren’s work does engage, means we must think again about what it is that an artwork is doing in the world and how we interact with it (rather than how the artwork interacts with us). This is not to say that Ren Bo does not expect a reaction, but I think her work is not reliant on one, and perhaps plays with the process of a reaction, stalling it mid-flow to realisation.

The materials of Ren Bo’s installations may in most cases be found objects, but the choice and arrangements reveal intentions. The work Untitled-14 (2011) creates a tower of lamps, collected by the artist over a period of years. Untitled-14 makes these lamps strange, taking them away from their original function (although they still function as lights) and presents them to us in a new, unknown form. Totem poles come to mind with this piece, serving the purpose of veneration and remembrance. In Ren Bo’s case these are objects that she has collected over a long period and represent that period in the additive construction. While the carved figures and shapes of the totem poles remain highly symbolic of people and events, Ren Bo’s lamps remain resolutely mute as regards an easily deduced interpretation. A meaning remains a background suggestion, but does not impose itself on the experience or reading of the work. The progression of the stacked lamps presents this suggestion as an echo receding beyond reach.
“Like letters with no addresse, these uprisen beings remain without a destination. Neither blessed like the elected, nor hopeless like the damned, they are infused with a joy with no outlet.” —Giorgio Agamben

Here describing the inhabitants of Limbo, specifically the Limbo of St. Thomas Aquinas, Agamben describes the state of unawareness of these dead souls, having died as infants before baptism, and hence still in the state of original sin, yet never having had the opportunity to remedy that situation, nor a responsibility for their state. So they must “persist” in this special place, with neither the “afflictive punishments” of hell, nor the redemption of heaven. This state seems to contain within it a plethora of possibilities, without a chance of realisation of those possibilities. I believe Agamben’s sense here is that this is liberating in its way, by shifting attention from an idea of an end of an action, towards a ”means without end” (the title of another book by Agamben).

While I cannot claim to have any special insights into his work, Agamben’s way of thinking has strongly influenced my own outlook. I am particularly interested in its application to the act of art, art’s state of being “in process,” a state of potential that may be latent or recognised, and one that some artists actively exploit as a methodology for their work. I see this state as coming through in the work of Ren Bo. As with Limbo, “in process” shifts attention away from a destination (heaven or hell, for instance) or, bringing this into the context of art, a “finished” object (that I have elsewhere derogatively called “mute” or “dumb” objects), and towards the route by which it has reached the point at which we are viewing it. This point however remains not as the calm, stable state of settlement in the gallery, but as a state of being on the way.

Now, in many cases, Ren Bo is producing objects, so how do these differ from the “dumb” artworks I mentioned? The difference lies partly in intent and partly in the experience of the objects. Through their working with process in their production or as a means of reading them, Ren Bo’s works involve the audience in the activity of the work, and never take a straightforward approach to the object involved.

A work such as 25 Days of Dust (2008) is perhaps the most straightforward representation of a process in Ren Bo’s work. The papers covered in lint, removed from her clothes by a sticky roller, collect this time-based exfoliation. This on-going series becomes a visual record of what has collected on, and subsequently removed from, her clothing. In this case the visual has a strange relation to representation. The set of papers tell us in some detail something about the world around the artist as it accreted to her. But collected here they form a new pattern as pseudo-archive, which means little definite, but suggests much.
The visual is perhaps dominant but not privileged in Ren Bo’s work. Her videos, for instance play with light and sound, as well as their materiality in the nature and position of the screen in the world. These elements then become representational of what has been filmed. Ren Bo can present the video as just one more source of light, which contains within its pulsing a potential meaning. The resolved video images can be taken as representational, but these representations are obscured in themselves by manipulation of the sequences. Innocent Fragment (2006) presents a fast (Allegro) and a slow (Adagio) version of a distorted image. Neither seems any closer to a truth than the other, but each has a different feeling and affect, and together they play these affects off each other. In White White (2012) the screen is used simply as a source of light as it emerges from beneath the fabric of some sheets and a skirt.

Sound seems exemplary of “in process.” It is produced, it is emitted, it travels and settles in recordings that must always be emitted again to live on. But each emission is unique, in parallel with an ever-present and undefinable Cage-ian ambience. The sounds are ultimately ephemeral, existing for as long as they are emitted, each sound progressing to the next, melding with the ambience, on their way to decomposition.

The onomatopoeic Patapata (2008) props upright a coiled plastic sheet, while a hanging laser pointer spins inside, its red spot of light dancing dizzily while making the titular sound as it knocks against the plastic. It seems created with great intention, but the artist must finally concede the ability to define exactly what it is that it does, apart from to say that it “pata-patas.”

If Ren’s artworks make any sort of demand, it is a quiet demand that they not be separated from the rest of the world. The objects do not assert themselves, but insinuate themselves into the space, through their diversity of material forms as well as their use of other senses, including the elements of abstract light and sound which spread out and subvert an expectation of a coherent core for the pieces. They bleed out into the surroundings, in their materials, the light, the sounds, blurring the edges of the works into one another. In many cases Ren Bo makes objects or collections of objects (we cannot get away from that) but these become problematic through this blurring. They work against the idea of a dominant form of an artwork, of attracting attention, of confirming an artist’s recognisable style, or an object (visual, sonic, or otherwise) that can effortlessly become co-opted into the system of commodities.

So it is possible to see the elements as part of a transmission of sorts. Nothing holds its own as an absolute. In this way the objects take on a meaning that upsets their presence in the world. Not by inference—by applied meaning—but by their own internal presence evolving out into the world as meaning. Similar to the way sound intimates, the object (for all its presence) remains obscure, slowing down the progress of meaning. They represent a delay of meaning, privileging the action of thought and experience through time, and action as progression not completion.

It may seem difficult to address Ren Bo’s work because of its apparently dispersed nature, but I think this is close to the way in which it should be appreciated. On the one hand each piece holds a certain attraction, but it is difficult to use this attraction as a consistent elements across all of her works. On the other hand, I am suggesting her works display this act of being in progress, which is not about form or symbolism but about a certain way of being. This, I believe, is a consistent element of Ren Bo’s works and allows the viewer to take another view of artworks which goes beyond, or does not stay too reliant on, absolute entities of art which obediently sit in space and play their role as forms of artworks, or that maintain the standard of the object of consumption. Ren Bo’s works quietly refuse to accept that role, and do not sit quietly but bother this world of objectification and subsequent consumption in which they appear. In some cases they bother the world of objects by being difficult to frame as one thing or another. They certainly bother the world of art by being unwilling to accommodate art structures too easily, creating questions about how to deal with such objects within the art milieu and, to take this one step further, to bother the idea of what an artwork is and of what an artwork can do.